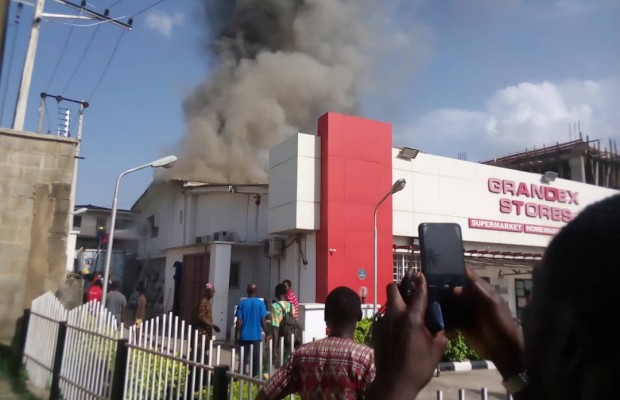 Part of a grocery and household supermarket believed to be owned by the wife of the late former Governor Abiola Ajimobi, Mrs.  Florence,   located at Bodija, Ibadan, Oyo  State, Grandex Stores, was on Sunday razed by fire.

The incident which started from the back office gradually spread to the main stores.

The men of Oyo State Fire Service who came to put off the fire were not able to curtail the inferno.

It took the combined efforts of the Federal Fire Service to extinguish the fire.  The federal firefighters who came later went to the Area enter through the back of the store to spray water to the raging fire.  This singular step put an end to the incident.

Those reading newspapers at the popular Osuntokun junction also saved the day as they rallied round to fetch water and bring to fire extinguishers to quench the fire before the arrival of firefighters.

Some of the aides joined in evacuating goods from the stores while some stern-looking officers of Operation Burst were on ground to prevent looting.

The team leader of the Federal Fire Service who spoke with journalists under anonymity attributed the incident to electrical sparks and over-loading of electrical sockets.