NFF President, Alhaji Aminu Maigari and Chairman Technical Committee of the federation, Christopher Green, have expressed their confidence that the Super Eagles will overhaul Kenya in the return leg of the World Cup qualifier slated for June in Nairobi, the Kenyan capital.

Maigari, said it was a difficult game because the Kenyans came with a match plan to frustrate the African champions but were overwhelmed by the character of the Nigerian side. “It was always going to be a difficult game but the Kenyans came with a mind to frustrate the champions but we have a team that has character and at the end of the day they were surprised at the manner we held our own even when they were telling themselves that they have won the match.

Maigari assured that the team will be better prepared for the return leg in Nairobi and urged Nigerians to be always supportive of the team through thick and thin.

Green on his part said the some of the players who did not put in their best should by now know what it takes to play for the Super Eagles because the team is not ready to relinquish the crown in the nearest future. “We have an abundance of talents across the world but we must be sure to make the right choices of players and that is why my committee is working closely with the coaches of the national teams to make sure that the best players are picked for action at all times. But if I must say, some of the players that were on parade did not come to the party on Saturday and they know themselves.”

Speaking after the match, Head Coach Stephen Keshi, said the draw was a wake-up call to the players and his technical crew. Addressing the players and officials immediately after the encounter, Keshi said he was impressed by the players’ output but noted that the Kenyans came with a match plan to frustrate the Eagles. “From the airport in Lagos they were complaining and they came to Calabar with the same attitude but we still held our own against them. Being champions is not an easy thing and I think we now know how to play like champions when next we meet them in Nairobi.
The former Togo and Mali Coach congratulated the players for the resolute desire not to loose the game in Calabar and called for more Kenya.


Meanwhile deputy Super Eagles Skipper, Vincent Enyeama, was full of praise for his team-mates after the team pulled off the late equalizer against the Harambee Stars of Kenya at the UJ Esuene Stadium in Calabar.
Enyeama, who said the team had an unlucky day despite having better possession of the ball declared that the Eagles will make up for the Calabar flop with a resounding result when both teams meet in the return leg in Nairobi. “We tried all we could in Calabar, but it was simply one of those days when you can’t explain what really went wrong, we did all the playing and all the possession but they scored a shock goal and made us chase the game. But the promise we will give is that in the return leg we will pay them back with a better result for Nigerians”.

The stand in Skipper for the Super Eagles said that some teams, would have given up in the second half but the Nigerian Team kept fighting  resiliently till the equalizing goal came. "I trust that if we had a few more minutes we would have won the game but we have a return leg to play and we would be ready for them" 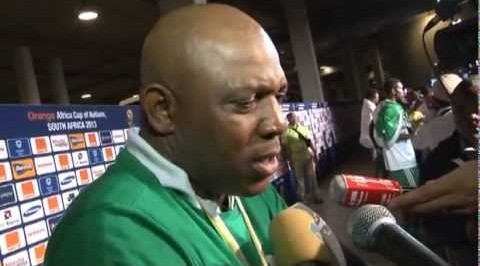