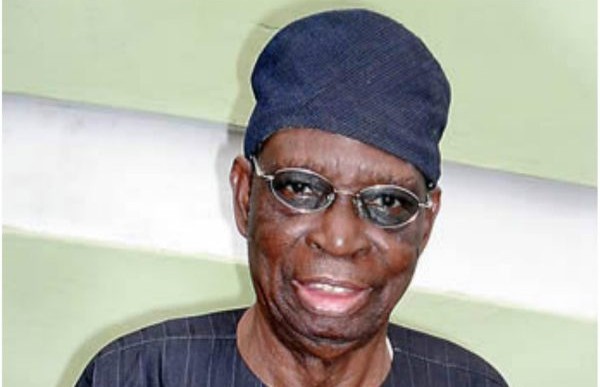 Elder statesman, Sen. Mojisoluwa Akinfenwa is dead. He passed on at a private hospital in Ibadan, the Oyo State capital at the age of 89.

Akinfenwa was a progressive politician. As a teacher, he joined the Action Group (AG) Youth Association, led by the late Chief Remi Fani-Kayode, and later, Ayo Fasanmi, along with his bosom friend, the late Chief Adebayo Adefarati.

He was among the activist teachers who mobilized pupils against Premier Ladoke Akintola, when he came to Atakumosa Grammar School, Osu, to commission the school laboratory. The elder statesman nearly lost his life thereafter when political thugs, sympathetic to the defunct Nigeria National Democratic Party (NNDP), attacked him.

Correspondent Kunle Ojo reports that a condolence register has been opened at his Oluwokekere residence in Bashorun area of Ibadan, the Oyo State capital while dignitaries have continued to visit to commiserate with the family of the deceased.

Some children of the elder statesman, Tolulope and Funke in a separate interview with our Correspondent described the passing away of their father as painful but expressed satisfaction with his contribution to the development of the Yoruba race and Nigeria at large.

In 1999, Akinfenwa was elected into the Senate from Ife/Ijesa District on the platform of the Alliance for Democracy (AD). He was the AD Senate Leader. However, he lost re-election in 2003.

Akinfenwa and his compatriot, Chief Bisi Akande, competed for the national chairman of the party. The contest split the party and the pan-Yoruba organization.