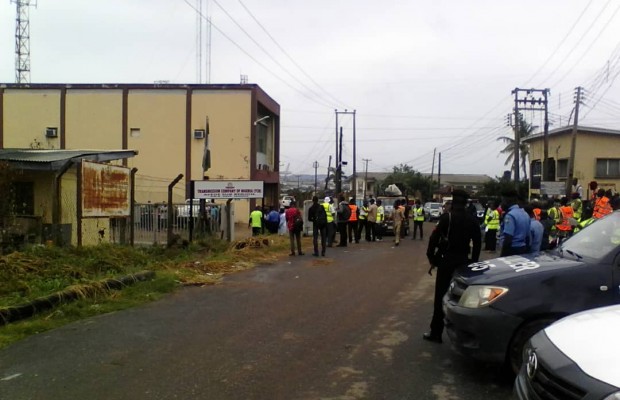 The people of Egbema Ijaws in Warri North local government area of Delta state have stormed the Delta state government house in Asaba, to protest over what they described as 26 years marginalization of the Ijaws by their Itsekiri neighbors who have been occupying the seat of the council chairman.

The protest which is coming two weeks to the local government elections in the state is seen by the people as a means of addressing  issues to prevent  further crisis.

The protesters who were singing solidarity songs while displaying placards of different inscriptions expressed their displeasure.

Meanwhile, after over two hours of protest by the Egbema Ijaws calling for an urgent intervention by the state governor, the Chief of Staff to the governor, Tam Brisibe led by armed policemen came out to address the people on the move by the governor.

In 1999, similar incident led to crisis between the Ijaws and Itsekiris in Warri South West in which also resulted to loss of lives on both sides.