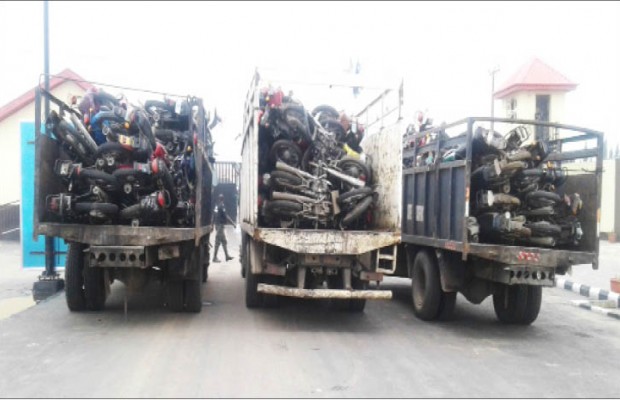 Hoodlums suspected to be commercial motorcyclists whose motorcycles were impounded by a task-force team led by the Delta state commissioner for transport, Vincent Uduaghan last week, have attacked the chairman and officers of the state task-force leaving them with machete cuts.

This is coming barely a week after over a hundred commercial motorcycles were impounded along the busy Warri/Effurun expressway to effect the ban on motorcycles in some routes in the state.

The commercial motorcycle operators who had threatened to attack the task-force officials as a result of the seizure of their motorcycles, pounced on the officials when they arrived the expressway in the early hours of today and left them with cuts and a damaged windshield.

Chairman of the task-force who was rescued with machete wounds said they were overpowered by the angry motorcyclists.

Also speaking, the coordinator and a bus owner who rescued the task-force officers narrated how they escaped after being lynched.

Meanwhile, despite the ban placed on motorcycles popularly called Okada on Delta highways, commercial motorcycle operators seems not to relent as they could be seen plying the Warri expressway without fear and threatening task-force officers to arrest them and face the consequence.

SEMA assures on return to peace in Borno