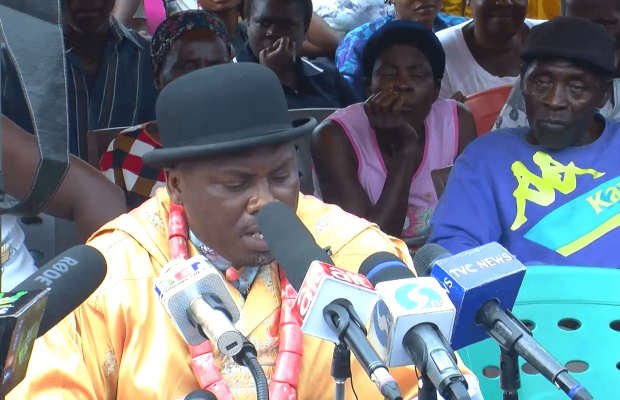 Following efforts of the rivers state government to broker peace between oil giant, shell and the host community of OML 25, the people have insisted that they will not allow the company return to their land for exploration.

Paramount ruler of kula, the host community of OML 25, king Kroma Eleki, disclosed this during a world press conference in the town.

Speaking with newsmen, king Eleki said despite leading the delegation to government house, port Harcourt for the signing of an MOU, he is standing by the decision of his people.

The people of Offoi-Ama and Belema are also insisting that the community have suffered underdevelopment and degradation and will not be part of any agreement that will bring back shell. they read out their demands before any plan to reopen the OML 25.
some residents bemoaned the condition of living in the area and called on the federal government to intervene and stop the planned invasion of the communities by the state government and recall that the OML 25 flow station was shutdown in august 2017 by the community, over unfair treatment by the multinational oil giant in the area.