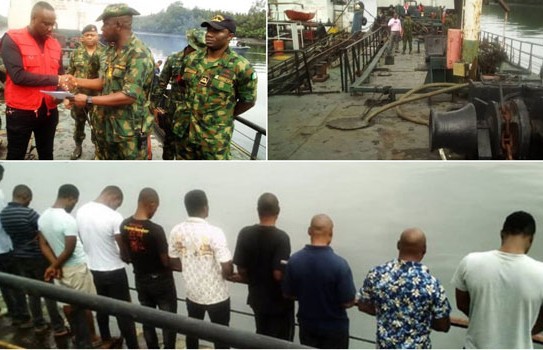 As part of efforts to put an end to oil theft on the waterways, The Nigerian Navy Forward Operating Base, Bonny, Rivers State,  handed over a  vessel, MT Preye 1 and her crew of eleven suspected oil thieves arrested by officers to the Economic and Financial Crimes Commission, EFCC for further investigation and possible prosecution.

The Commanding officer Forward Operating Base of the Nigerian Navy, Bonny, Navy Commodore Kolawole Oguntuga stated that the Navy is committed to safeguarding the maritime environment.

Deputy Detective Superintendent of the EFCC Akinsola Babajide of the Port Harcourt Zonal Office, promised diligent investigation of the alleged crime, as the Navy commodore call on oil thieves to desist from the act.