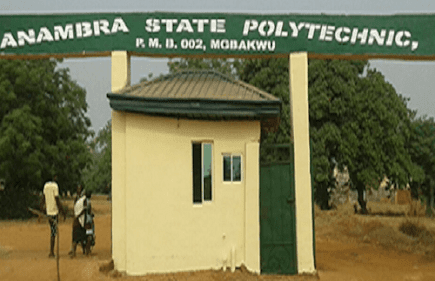 Students of the Anambra state polytechnic, Mgbakwu have staged a peaceful protest over what they called continued neglect of the institution by the government.

The protesting students carried placards with various inscriptions like "we are suffering, the road to our school is a death trap, the school has no accreditation,  no infrastructure in our school, governor Obiano come to our rescue" among other write-ups as they chanted solidarity songs to government house.

The president of the  Student Union Government of the school, Mr Innocent Ikegbuna said the protest followed series of unfulfilled promises made by the government since three years it upgraded the institution to a polytechnic.

That graduates from the school have not been able to mobilize for National Youth Service due to non-accreditation of the school.

He noted that apart from infrastructural deficits inside the school, the deplorable condition of the only road leading to the polytechnic was a nightmare to both staff and students.

Addressing the students, the Anambra state Commissioner for Tertiary Education, Science and Technology, Professor Nkechi Obiekezie said the road leading to the institution was under construction but noted that the contractor would be mobilized back to site as soon as the dry season set in.

She also said that the government had been making efforts to ensure that the school is duly accredited by October 2019, adding that the Polytechnic had passed the verification test of the National Board for Technical Education which prompted the boards' scheduled to visit by October.