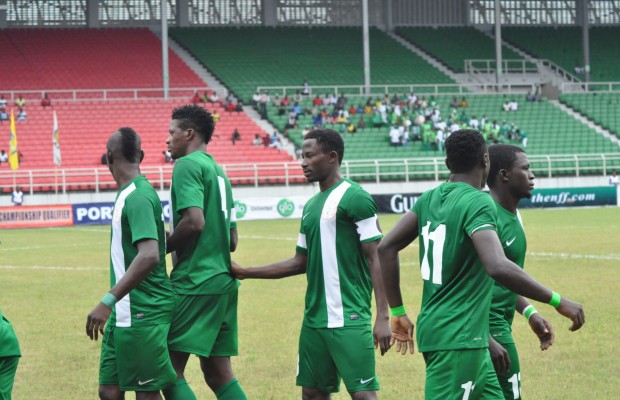 The Super Eagles were beaten 1-0 by Benin Republic in a 2018 African Nations Championship qualifier on Sunday evening.The hosts enjoyed the bulk of possession in the opening twenty minutes and were close to taking the lead just before the half-hour mark but a close range header went over the bar.

Nigeria ended the first half stronger, carving some chances and causing panic in Benin's vital area. Eduwo missed a glorious chance to put the Super Eagles 1-0 up in the 68th minute when his shot was deflected for a corner kick.

Akwa United's Alhassan Ibrahim was a constant threat when he came off the bench and was denied a certain goal when he tripped at the crucial moment after waltzing his way into the box.

The last quarter of the game belonged to Benin Republic as they searched for a winning goal, which finally came in the 90th minute when Mama Seibou converted a spot kick.Orji Kalu Okogbue got a second caution after full time for confronting the referee, and is unavailable for Saturday's second leg in Kano. Football’s governing body Fifa took the CHAN qualifier between Benin and Nigeria as a friendly, and the Super Eagles might slide in the next ranking after losing to a country ranked 91.