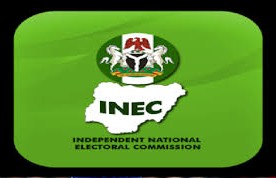 At a brief swearing-in ceremony, held at the Commission’s headquarters in Abuja, INEC Chairman, Professor Mahmood Yakubu told the new RECs that they would be immediately responsible for the implementation of the Commission’s policies.

Professor Yakubu who informed the new RECs that they could be deployed to any part of the country except their states of origin, depending on the exigencies of the job, immediately announced that Dr. Johnson is deployed to Cross River State while Mr. Gajiram is deployed to Taraba State.

He told the new officials that their deployment is coming three days to the conduct of several re-run elections ordered by court order.....hence the need to get ready to work.

He also assured Nigerians of the Commission's readiness for the re-run elections as all sensitive and non-sensitive materials have been deployed to the States.

Dr. Alalibo Sinikiem Johnson who responded on behalf of the new RECs promised to deliver on their mandate.