One dead as tanker explodes in Ibadan 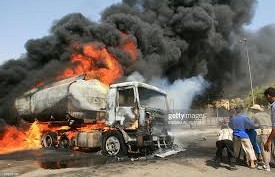 A middle-aged woman was on Wednesday, May 17, burnt beyond recognition while five houses were razed down when a tanker filled with petrol skidded off the road at Ologuneru area of Ibadan, Oyo state.

The incident caused pandemonium in the area as the fire spread around before it was put off by officers of the state fire service.

Eyewitness account has it that the tanker was coming from Eleyelr end of Ibadan going towards Ologuneru and in an attempt to climb the hill in the area skid off the road and spilled its content.

The tanker was said to have exploded, and burnt a Nissan car on the same road. The inferno spread to about five buildings in the area including a church and razed all property in them.

The Director of the Oyo state fire service, Kareem Oyekunle said two house were razed but our correspondent counted five including a church were affected adding that the remains of the woman who was burnt had been recovered.

As at the time of this report, the identity of the woman burnt in the incident is yet to be verified while her remains have been removed by officers of the Oyo state police command. 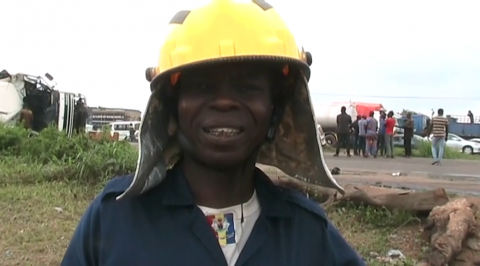