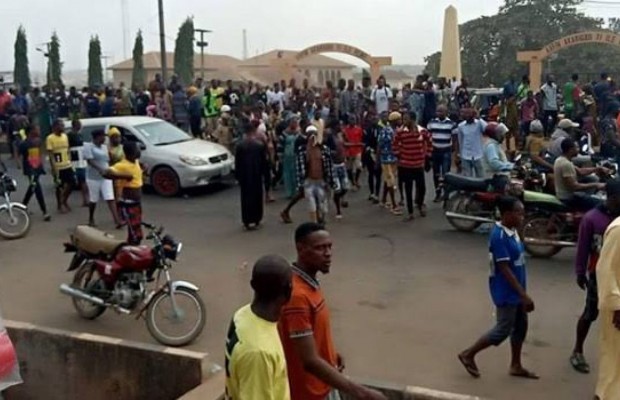 Protests over killing of a soccer star, Tiyamiyu Kazeem in Sagamu, Ogun State, on Monday turned violent, leaving many injured.

Kazeem, who was Assistant Captain of Remo Football Club based in Sagamu, was allegedly killed by an operative of the Special Anti - Robbery Squad (SARS) on Saturday, along the Abeokuta-Sagamu Expressway after he was arrested for being an internet fraudster.

However, protesters including aggrieved women and youths,  took to the streets on Monday to express their grievances over the footballer's death.

They also stormed the palace of Akarigbo and Paramount Ruler of Remoland, Oba Babatunde Ajayi, demanding justice for the deceased.

The protesters condemned incessant brutality and indiscriminate arrests by law enforcement agents in the town and its environs.

Armed policemen were said to have been deployed in the town to forestall a breakdown of law and order.

The atmosphere in Sagamu was tense as the protesters move from one point to the other chanting anti - SARS slogans.

But in what appears to be a turn of event, the protest reportedly turned violent.

Galaxy News learnt that the police fired live bullets to disperse the protesting youths and in the process, it turned violent leaving many injured.

When contacted by Galaxy News, the Spokesman of the State Police Command, Abimbola Oyeyemi confirmed that the protesters were dispersed by the police while advancing towards the police state.

Meanwhile, the State Government has sued for peace over the violent protest that engulfed Sagamu town.

A statement signed by the Special Adviser on Public Communications to the governor, Remmy Hazzan described the killing of the youth as unfortunate