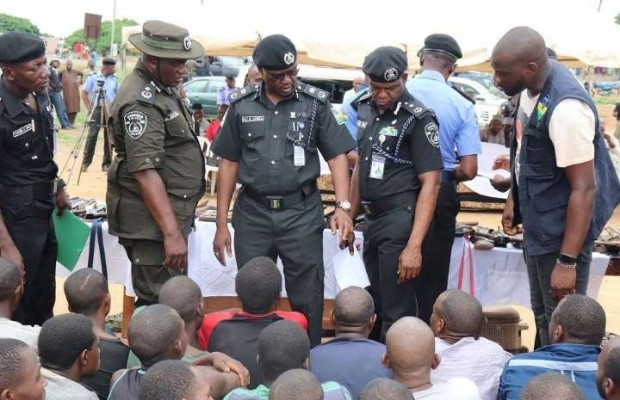 The Delta state police commissioner Hafiz Inuwa has finally paraded the notorious 19-yr-old female suspected armed robber arrested with her gang members after killing a victim and stabbing a woman after collecting her valuables.

This is coming barely a month after she was arrested in an overnight raid by operatives of the Operation Safe Delta in Warri.

Addressing newsmen before parading the suspects and other suspects which includes the killer of three policemen in Benin, two fake naval officers and kidnappers, the Delta police boss said the female suspect was arrested after committing various crimes.

On her part, the female suspect said she was initiated by her male friend as the killer of the policemen and fake naval officers spoke on their arrest with the commissioner speaking on their challenges.

Over sixty suspects were paraded for different offenses ranging from armed robbery, kidnapping, and illegal arms manufacturers, while different types and sizes of guns, operational motorcycles and chemicals were also on display.