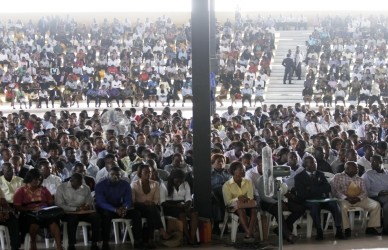 Oyo state government says it has received 156,000 applications in the ongoing recruitment exercise to fill 10,600 teaching and non-teaching positions in the state public schools.

Commissioner for Education in the state, Olasunkanmi Olaleye, while speaking with journalists after the state executive council meeting said that 91,000 job seekers applied for the 7,000 vacant teaching positions while 65, 000 submitted applications for 3,600 vacancies in the non-teaching department.

He said the process for the conduct of Computer Based Test(CBT) for all qualified applicants was ongoing, saying the CBT would likely hold in April after a thorough scrutiny of the applications.

The Commissioner admonished all the applicants not to fall prey into the hands of scammers and fraudulent individuals, claiming to assist in getting the job.

On Judiciary and Health, the Attorney General and Commissioner for Justice, Prof. Oyelowo Oyewo disclosed that the state government has approved the creation of the office of the public defenders while his counterpart from Health disclosed that the government has approved the procurement of ten ambulances to be distributed across the state for emergency services.

Our focus is to create jobs - President Buhari