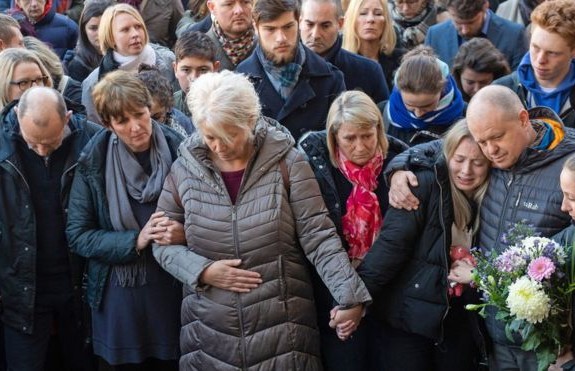 Vigils for the victims of the London Bridge attack have been held in London and Cambridge. Jack Merritt, 25, and Saskia Jones, 23, were commemorated at the services and minute's silence at Guildhall Yard in the City of London and outside the Guildhall in Cambridge.

They were stabbed to death by convicted terrorist Usman Khan, 28, at a prisoner rehabilitation conference on Friday.

Mr Merritt and Ms Jones were both University of Cambridge graduates and had been at an event for the University's Learning Together programme - which focuses on prisoner rehabilitation - when they were attacked.

Prime Minister Boris Johnson, Labour leader Jeremy Corbyn and the Mayor of London Sadiq Khan were among those at the vigil in the capital.

In an address, Mr Khan said London would never be cowed or intimidated by terrorism. The London service happened less than a mile from Fishmongers' Hall, where Usman Khan launched his attack on Friday.

Usman Khan, who was released from prison in December 2018 after serving half of his sentence, was later shot dead by police on London Bridge.

She paid tribute to the workers at Fishmongers' Hall, who she said went to work to offer hospitality, but found themselves needing to give protection.