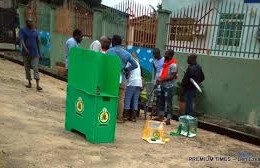 What comes to mind when you hear the word 'election?' A competition? The moment political parties (or independent candidates in some cases) proof themselves worthy of people's acceptance and legitimacy. The moment the incumbent party defend all they have done in the past years, and most importantly, the time for oppositions to throw insults and accusations at the incumbent government.

One notable thing that usually occurs during electioneering campaign is the attempt of political parties to convince the electorates they are the best candidate for the job, and in this part of the world, that is about the only time the electorate have to feel special and needed by the ruling class. The time to merchandise votes to the highest bidder, a notion held by many Nigerians and which can be blamed for the faulty leadership system we have in Nigeria today. However, the form an electioneering campaign will take defer from one country to the other, in some countries, the ability to sell good ideas determines the success of a candidate, but in a nation like Nigeria, how far a candidate will go depend largely on how many bags of rice he can afford, how much he can pay to get a vote and then also, how smart he is to lie his way through the whole process.

This perhaps is the main fault with council elections in Nigeria. The success of a candidate in an election should not be determined by the party in power; the recent        Presidential election in America is an example, you think that this too far? President Buhari won the 2015 presidential election with over 15 million votes to oust incumbent Goodluck Jonathan. But in our council elections, this seems to be far from the normal trend

Just last month, a council election was held in Lagos state, at the end of the election, All Progressives Congress (APC), the political party in power in the state won the whole 20 local governments seats and 37 Local Council Development Areas. The same thing happened in 2011 when the defunct Action Congress of Nigeria (ACN) was declared the winner of the entire election. The trend is  not only in Lagos, in a council election held in Kano state in May 2014, APC won all 44 council seats and 484 councillorship positions, leaving other 18 parties that contested with nothing.

Likewise in 2013, People's Democratic Party (PDP) was declared the winner of 15 council seats in Kwara state. The same thing happened in Ebonyi in April this year when PDP floored other parties to win the whole council seats and 171 councillorship positions.

The described examples above, which is just a tiny piece of the reality we are faced with shows that council elections in Nigeria is just a charade, a gimmick, a drama set up by state governments to flex their muscles and show their opponents they are in control.

"Why organize an election when the winners are already known?" is a big question begging for answer. Why put millions of tax payers’ money into a game where the winners are not picked at the poll but by the party. In council elections in Nigeria, election aspirants do most works during the primaries, especially aspirants from the ruling party, the reason is not farfetched, once a candidate wins the primary, he has won the election.

If we want progress from the grass root, this trend must stop as it is not just wasteful, it is also very embarrassing. The move of the Senate to grant local governments autonomy is a welcomed development, but it must not end up in the book like some bills that has been passed, it effects most be felt in the grass roots politics and the people must see the difference. This will make lazy candidates sit up and incumbent parties will not expect a free automatic ride to victory as it is happening today.