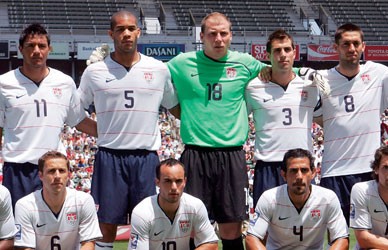 The United States Soccer Federation has taken the first step to beat the Nigerian Federation to the international future of the highly-rated Sporting Kansas defender Ike Opara.

Acting United Men’s National Team head coach Dave Sarachan has invited Opara and 29 players for the USA’s annual January Camp scheduled to take place at the National Training Center in Carson, California.Born in Durham, North Carolina, Opara has represented the United States U20 and U23 national teams in the past but was never invited to the senior team until now.

The national team coaches have looked his way after he won the MLS Defender of the Year with Sporting KC in 2017.The 28-year-old made USA's roster for the 2009 Fifa U20 World Cup, where he featured in matches against Germany, Cameroon and Korea Republic.

Should Opara make his senior international debut for the Americans against Bosnia and Herzegovina on January 28, he will still be eligible to play for Nigeria until he plays a competitive game for the country of his birth. The immensely talented center back was named to Major League Soccer's Team of the Season for 2017.