Liverpool Top League With a 4 - 0 Win Over 'Spurs 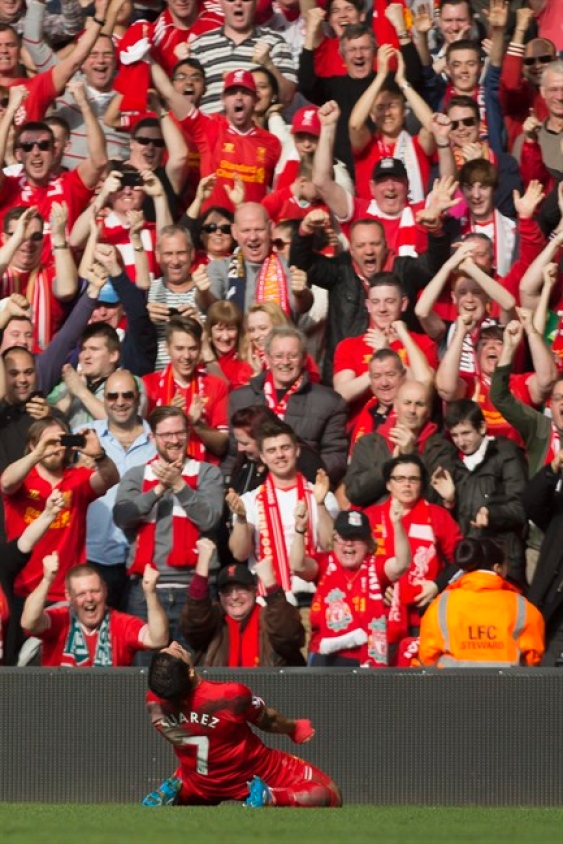 Liverpool moved to the top of the Premier League as they humiliated a woeful Tottenham side at Anfield.

Daniel Levy, the Tottenham chairman, could only look on with envy as the manager who rejected his approach in 2012 – "citing instability at White Hart Lane as the reason – orchestrated another Anfield demolition. Two seats behind sat a squirming Tim Sherwood as angry visiting supporters chanted "Where is our manager?" following an inept display from a team that started the season with the ambition that Liverpool are close to delivering.

Momentum is with Rodgers' team, who were met by an incredible roar from the Kop after the final whistle, and so is history. The similarities between Liverpool and Bill Shankly's first title-winning campaign of 1963-64 are uncanny. In Luis Suárez and Daniel Sturridge, Rodgers' team possess their first two players to score 20 league goals or more in a season since Ian St John and Roger Hunt 50 years ago. Shankly's championship breakthrough also featured 1-0 and 3-0 wins over Manchester United and, on this day half a century ago, Liverpool beat Tottenham at Anfield to go top of the table. First place was not relinquished and Liverpool claimed their first title in 17 years. They look in the mood to do likewise this spring.

Liverpool's ability to cope with the pressure of an unchartered title race was questioned following a nervous finale to Wednesday's win over Sunderland. The luxury of an early goal, and playing against Younès Kaboul plus a Tottenham defence lacking the discipline or work-rate of Sunderland's, rendered that an issue for another time.

Sherwood had only just taken his seat in the Anfield directors' box when Philippe Coutinho found Raheem Sterling on the right, the young England winger and the Brazilian both included as Rodgers added even more adventure to his penetrating team. Both would depart to deserved standing ovations.

Sterling released Glen Johnson beyond the lazy challenge of Christian Eriksen and the right-back's low cross deflected off Jan Vertonghen, then Kaboul, and trickled over the line with Hugo Lloris stranded. Title contenders do not require gifts but a delirious Anfield accepted gratefully.

The failure of two centre-halves to deal with a routine delivery into their six-yard area set the tone for a hapless defensive performance from the visitors. Sherwood spent much of the first half shaking his head in restrained fury. Kaboul let a cross bounce in front of him and Suárez almost pounced. He was later dispossessed by Sterling on the edge of his own area and only a stunning save from Lloris prevented Suárez scoring with a header at the back post.

By contrast, Jon Flanagan threw himself into perfectly timed challenges and the entire Liverpool side defended like men possessed. On the few occasions they had possession in the Liverpool half before the interval, Spurs found nowhere to go. Eriksen had one decent opening but Martin Skrtel, typifying the concentration and effort in the home ranks, threw himself into a vital block. Simon Mignolet also saved comfortably from Nabil Bentaleb and Roberto Soldado once Spurs settled into the contest. Although it was too late by then.

Liverpool's second and Suárez's 29th of the season stemmed from another mix-up in the centre of Tottenham's rearguard. Michael Dawson had only been on the pitch for a minute as a replacement for the injured Vertonghen when, under no pressure, he carelessly attempted to turn Steven Gerrard's long ball inside for Kaboul. The French defender had Suárez on his shoulder and insufficient strength or quality on the ball to keep it that way. A poor first touch sent the Uruguay international clear and, with plenty to do, he raced into the area and swept a left-foot shot low into Lloris' far corner, setting a new Premier League scoring record for Liverpool in the process.

There was no let-up in the tempo of the Liverpool display or the demands on them. Rodgers berated Coutinho for hugging the touchline when he was under instruction to play centrally. The reason why was underlined later on when the Brazilian scored an excellent third. Mignolet started the move from the Liverpool penalty area. Flanagan took over, ran into the visiting half unchallenged and squared to Coutinho, who also ventured forward without a white shirt coming close and sent a precise finish into the bottom corner from 20 yards.

Serena Triumphs Over Li To Win Sony Open In Miami