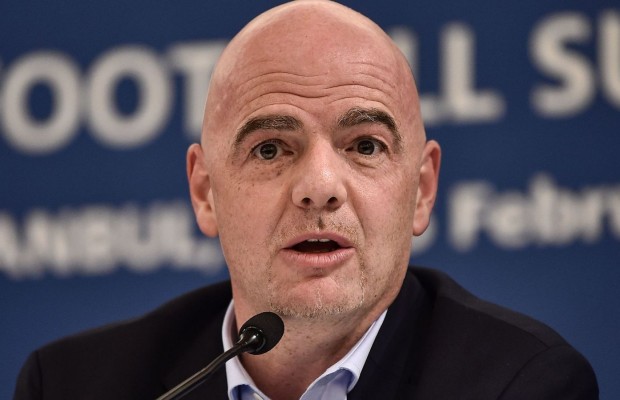 Gianni Infantino has been re-elected as president of football's world governing body Fifa for a second term.

Gianni Infantino is from Brig in Switzerland, less than six miles from his predecessor Sepp Blatter's home town Visp.

The Swiss-Italian, 49, was re-elected until 2023 without opposition at Fifa's annual congress in Paris.

He succeeded Sepp Blatter in 2016 and has increased the number of teams at the 2026 World Cup and proposed key changes to the Club World Cup.

Ex-president Blatter was in charge for 17 years until he was banned amid a corruption scandal in 2015.

Infantino's re-election was marked by a round of applause after rules were changed earlier in the day to no longer require a vote from Fifa's 211 members if only one candidate was standing.

In a lengthy speech at the congress, Infantino focused on the relative calm of his first term in charge compared to the situation he inherited.

Former UEFA secretary general Infantino was behind the expansion of the World Cup from 32 teams to 48 for the 2026 tournament, which will be held in the United States, Canada and Mexico.

Plans to bring the expansion forward to the 2022 World Cup were however abandoned last month.

In March, Fifa approved Infantino's plans for a 24-team Club World Cup starting in 2021, despite top European clubs saying they would boycott the tournament.

Demirezen named for Ajagba on July 20