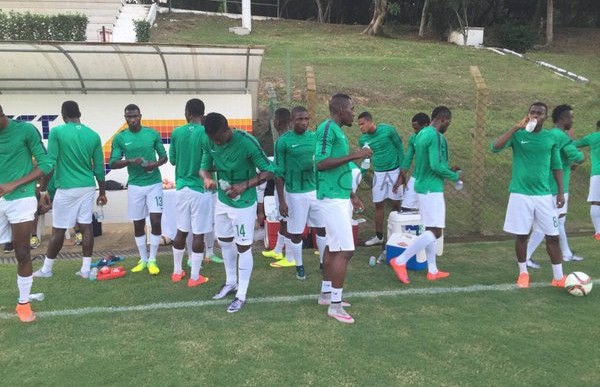 The duo of Leicester City of England’s Kelechi Iheanacho and Wilfried Ndidi are expected to lead 13 other Super Eagles players into the national team camp in Wroclaw on Monday ahead Friday ’s international friendly against Poland .

“Hopefully by Monday I will be in camp,”.Ogu also confirmed: “Immediately after our game I’m off to Poland to arrive on Monday.”Also expected in camp on Monday, are Kenneth Omeruo, Leon Balogun, William Troost Ekong, Shehu Abdulahi.Other Monday arrival include Chidozie Awaziem, Ahmed Musa, Brian Idowu, Junior Ajayi and Stephen Eze.

The pair of Obi Mikel and Odion Ighalo may arrive in Poland in the early hours of Tuesday ahead of the game.Both players will be in action for their respective teams in the Chinese Super League on Sunday before joining up with the rest of their colleagues Poland.Meanwhile, the home-based duo of Ikechukwu Ezenwa and Okechukwu Gabriel departed  the country y.stedayalongsideCoach Salisu Yususf.

The Super Eagles camp for the friendly international against Poland is expected to come to life with the arrival of 15 players on Monday after playing the weekend round of matches for their respective European clubsNigeria will face Poland on March 23rd before departing for England to take on Serbia four days later at the Hive stadium.

The camp of the Super Eagles will open in the Polish city of Wroclaw on Monday, ahead of Friday’s international friendly against Poland.

The two Russia 2018 FIFA World Cup-bound teams will meet at the 43,000-capacity Stadium Wroclaw on Friday night to begin their preparations.

The Super Eagles, who have a 28-man squad for the friendly, will face Serbia at The Hive, London (home ground of Barnet FC and London Bees) four days later.

Team Administrator Dayo Enebi Achor confirmed to thenff.com on Sunday that the Eagles would be staying at the Radisson Blu Hotel in Wroclaw.