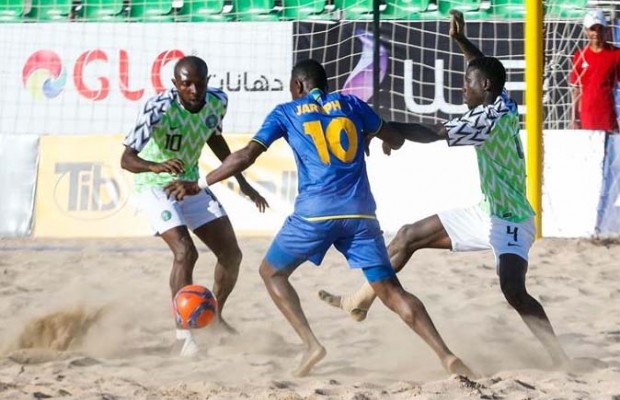 Following the abysmal performance of the Nigerian team at the last edition of the FIFA Beach Soccer World Cup, the country has announced withdrawal from future tournaments.

The Nigerian team lost all group matches and conceded a whopping 28 goals following 10-1 defeat to Portugal as well as 5-6 to Oman and 12-2 to Brazil.

Sports Village Square gathered from the communiqué from the Annual General Meeting to the Nigeria Football Federation (NFF) in Benin, the Board of the NFF unanimously resolved to put on hold Nigeria’s participation in international beach soccer tournaments.

Nigeria will only return after a ‘certain benchmarks, most importantly the creation and sustenance of a beach soccer league in the country, are met.’

Towards this, a five-man committee headed by Chairman of the Organizing Committee, Seyi Akinwunmi and including Mallam Shehu Dikko, Alh. Ahmed Yusuf ‘Fresh’, Chief Felix Anyansi-Agwu and Dr. Mohammed Sanusi was put in place to determine the modalities and guidelines, and to encourage states wishing to launch full-steam beach soccer leagues and compete among themselves or internationally.