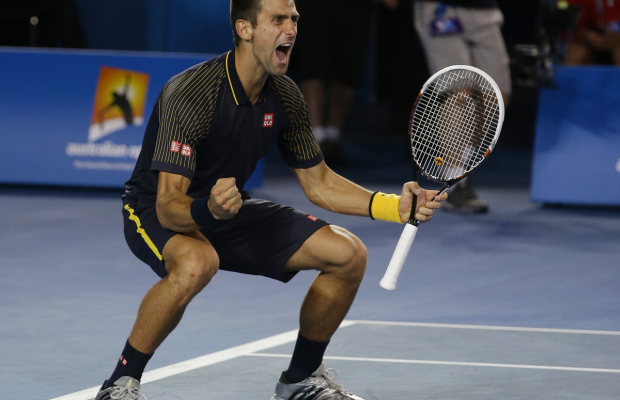 Nine other men had won back-to-back titles in Australia since 1968, but none were able to claim three in a row.

"I love this court," Djokovic said. "It's definitely my favorite Grand Slam. It's an incredible feeling winning this trophy once more."

He has won four of his six majors titles at at Melbourne Park, where he is now unbeaten in 21 matches.

Born a week apart in May 1987 and friends since their junior playing days, the two played like they knew each other's game very well in a rematch of last year's U.S. Open final won by Murray. There were no service breaks until the eighth game of the third set, when Djokovic finally broke through and then held at love to lead by two sets to one.

Djokovic earned two more service breaks in the fourth set, including one to take a 4-1 lead when Murray double-faulted on break point.

The 25-year-old Serb didn't rip his shirt off this time, as he did to celebrate his epic 5-hour, 53-minute win over Rafael Nadal in last year's final. He just did a little dance, looked up to the sky and then applauded the crowd after the 3-hour, 40-minute match.

Murray's win over Djokovic in the U.S. Open final last year ended a 76-year drought for British men at the majors, but he still is yet to make a breakthrough in Australia after losing a third final here in the last four years.

Djokovic's win went against the odds of recent finals at Melbourne Park. In four of the past five years, the player who won his semifinal second has won the tournament. But this year, Djokovic played his semifinal on Thursday – an easy three-set, 89-minute minute win over No. 4-seeded David Ferrer. Murray needed five energy sapping sets to beat 17-time major winner Roger Federer on Friday night.

The win consolidated Djokovic's position as the No. 1-ranked player in the world, while Federer and Murray will be second and third when the ATP rankings are released Monday.

Their last two matches in Grand Slams – Murray's five-set win at last year's U.S. Open and Djokovic's victory here last year in five in the semifinals – had a total of 35 service breaks.

It was a vastly different, more tactical battle on Sunday, with the first two tight sets decided in tiebreakers.

Murray, who called for a trainer to retape blisters on his right foot at the end of the second set, was visibly annoyed by noise from the crowd during his service games in the third set, stopping his service motion twice until the crowd quieted down. After dropping the third set, he complained about the noise to chair umpire John Blom.

Djokovic also appeared frustrated at times, kicking the ball football-style back over the net after he hit a forehand long during a lengthy point, and muttering to himself while sitting down in his chair during changeovers. But both players were guilty of making unforced errors, often ending long rallies with shots into the net or long.

Murray's fans came dressed for the occasion, with some wearing "Braveheart"-style wigs, Scottish flags painted on their faces and tartan caps. One group of men wore white T-shirts with black letters that spelled out A-N-D-Y; they serenaded Murray at the start of the first two sets.

There were a number of Serbian shirts, caps and flags in the stadium, as well as fans calling "Ajde!" or "Come on!" in Serbian to support Djokovic. Retired NBA basketball star Vlade Divac was sitting in Djokovic's box.

Djokovic looked agitated after failing to convert the break points in the first set, frequently looking up to his box and yelling at the members of his team and himself.

Although Djokovic went into the match with a 10-7 lead in head-to-heads, Murray had beaten Djokovic five out of eight times in tiebreakers, and that improved to six of nine after four unforced errors by Djokovic to end the first set.

Djokovic pegged back that edge in the second set, when Murray also didn't help his cause by double-faulting to give Djokovic a 3-2 lead, and the Serbian player didn't trail again in the tiebreaker. He leveled the match after nearly 2 hours, 15 minutes.

Andre Agassi was among those in the capacity crowd at Rod Laver Arena – the four-time Australian champion's first trip Down Under in nearly 10 years – and he later presented the trophy to Djokovic.

Victoria Azarenka, who won Saturday's women's singles final over Li Na, was in the crowd with her boyfriend rapper Redfoo. Actor Kevin Spacey, who met in the dressing room with both players ahead of the match and later tweeted a photo of himself with them, also was in attendance for the third straight night. 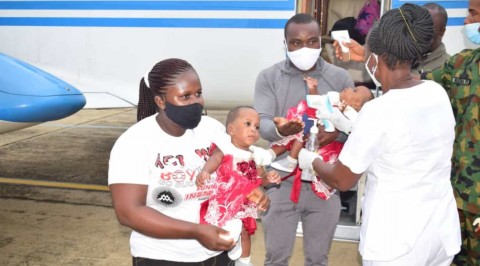