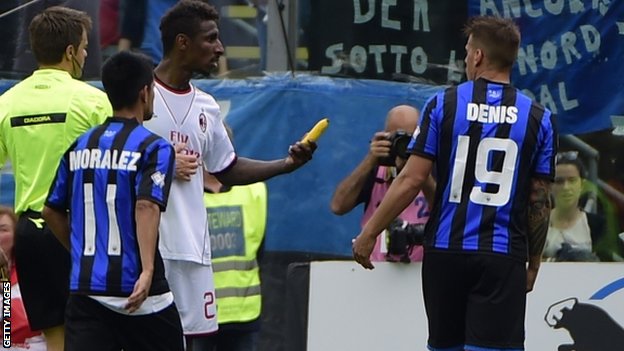 The incidence of soccer supporters hurling bananas as a way of racially abusing top black footballers playing in Europe's major leagues shows no sign of abating.

AC Milan defender Kevin Constant and midfielder Nigel de Jong were left raging by the abuse during a Serie A match against Atalanta in northern Italy Sunday, while fellow teammates applauded in a sarcastic manner.

Neither Milan or Atalanta were immediately available for comment, while Liga Calcio, which runs Serie A, is expected to make a statement later on Monday.

The FIGC, the Italian Football Federation, have opened an investigation and will issue a statement later this week.

Sunday's incident came just two weeks after Barcelona's Dani Alves captured the world's attention by eating a banana which had been thrown at him from the crowd during a league game at Villarreal in Spain's top league.

The Brazilian's quick thinking was widely acclaimed by anti-racism campaigners and he gained worldwide support through social media.

The fan was banned for life by Villarreal after throwing the banana which landed at Alves' feet as he prepared to take a corner.

His response was to dance in front of his alleged abusers.

It's not the first team Constant has been racially taunted. The French-born Guinean player was racially abused during a preseason friendly game against Sassuolo in July.

Constant smashed the ball into the stands and walked off the pitch after becoming enraged by racist chanting emanating from a section of supporters.