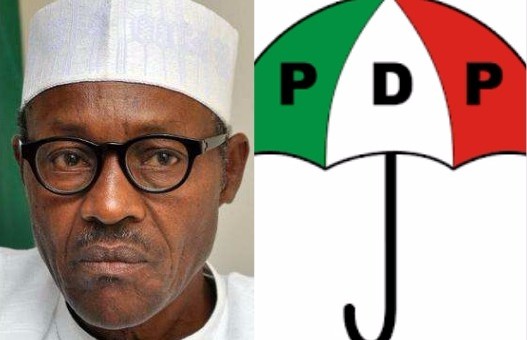 The People’s Democratic Party PDP has come down hard on President Muhammadu Buhari for his Easter message to Christians where he declared he has worked hard to meet the expectations of Nigerians in  the last two  years his administration has been in power.

The PDP, in a statement released by the Part’s National Publicity Secretary which was made available to Newsmen in Abuja alleged that the Bhuari led administration had rather made the lives of Nigerians more difficult as the economic has worsened.

“We read with rude shock and utter dismay, the President Muhammadu Buhari’s Easter Message to Nigerians and of particular interest is the Paragraph that said, ‘In the almost two years of this administration, we have worked hard to meet the expectations of Nigerians by improving security, especially in the North-East, sustaining the campaign against corruption and have taken steps to revitalize the economy.’ Really?

“These comments from Mr. President are to say the least untrue and an insult to the intelligence of Nigerians who have been at the receiving end of his government’s mismanagement in the last two years.

“We cannot end this analysis without mentioning the comatose state of our economy in the last two years of this APC Administration.

“The immediate past PDP Government of Dr. Goodluck Jonathan grew Nigeria’s GDP from $270.5 billion in 2009, and handed over a Nigeria that had grown to become the fastest growing and largest economy in Africa and the 24th largest economy in the World, with a GDP of $574 billion.

“In May 2015, the PDP also handed over a single digit inflation rate but today, Inflation Rate in Nigeria is at a double digit of 17.26%.

“The Recession we are experiencing today in the Country is as a result of the failure of the APC led Administration to properly manage our economy.

“The Buhari Government is indeed clueless and had no economic plan until March 2017 when it launched the so called Recovery Plan. The economy is at a standstill.

“Major infrastructural development that began with the previous administrations of the PDP have been abandoned. Power Generation dwindled from over 5,000MW in 2015 to the present all time low of less than 2,000MW.

“The only project of note that this government has ever commissioned is the Abuja- Kaduna railroad which was 99 percent completed by the PDP administration.

“Against this backdrop and more, we are at a loss in reconciling President Muhammadu Buhari’s Easter message that he has met the expectations of Nigerians to the grim reality we have painted above.

“There is nothing to show by the APC led Government and we challenge the President and his team to articulate the two years achievement of this Government point by point and let Nigerians compare with previous PDP administrations.

“The War on corruption like other policies and programnmes of the Buhari led APC Administration has failed as well. As we have mentioned in our previous statements, any war on corruption that is selective and targeted at humiliating only leaders and other members of the opposition is a total failure.

“The entire anti-corruption war of the APC since inception is just in the media with only one conviction.

“Many of the Cases in Courts have been set aside and suspects discharged and acquitted while others are in EFCC and DSS detention centers without trial against their fundamental human rights as enshrined in the Constitution of the Federal Republic of Nigeria.

“Nigerians may also recall the several allegations of corruption made against prominent APC members that the Anti-graft Agency has not attended to.

“The Chairman of the Economic and Financial Crime Commission (EFCC), Mr. Ibrahim Magu has been rejected twice by the Nigerian Senate because of damning corruption allegations against him made by another agency of government.

“The same with the Chief of Staff to the President, Abba Kyari, the Secretary to the Government of the Federation (SGF), Babachir Lawal and a host of other government officials against whom very serious allegations have been made. None of them have been subjected to the usual interrogations and investigation,” PDP said.

Jonathan to appear before Reps