The Plateau state House of Assembly failed in its bid to elect principal officers and to inaugurate the 8th assembly for a proper take off of Legislative business in the state. The sitting was called off by the governor, Simon Lalong while citing security concerns that could lead to a total break down of law and other in the state.


The twenty four members that made up the Plateau state house of Assembly could not arrive at a conclusive end for a new speaker to emerged as the two contenders for the position, Hon Peter Azi, Jos North west, of the APC and Hon Istifanus Mwansat, Panshin South, of the PDP both pulled twelve votes each which led to stalemate and a recess.


After the recess it became clear that a compromise was not arrived at as the 13 members from the PDP extraction where determine to take over the leadership of the 8th assembly.  While the Peoples Democratic members had emerged from the break, the All Progress congress members where still being awaited when there state chairman was sited coming into the hollow chamber then what followed was dramatic.

The clerk of the assembly suddenly pulled out a letter said to be from Governor Simon Lalong calling for the postponement of the meeting citing security concerns .This did not go down well with the PDP members who said the governor has acted as a dictator because there was nothing in the state at the moment to suggest that there were any security threat directed at the lawmakers or the ceremony. 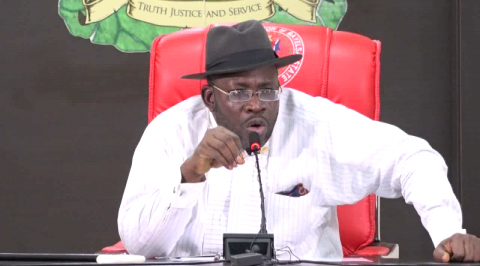