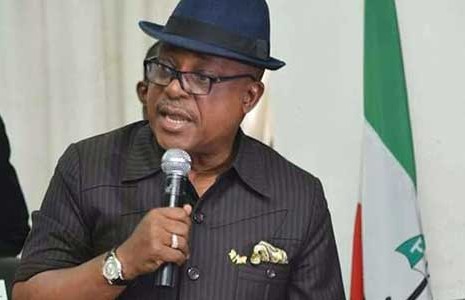 The leadership of the Peoples Democratic Party (PDP) has reacted to the alleged maltreatment of governor of Ekiti state, Ayodele Fayose.

Addressing journalists in Abuja, PDP National Chairman, Uche Secondus alleged that the policemen who teargased the governor, were acting under instructions from President ‎Muhammadu Buhari.

‎Prince Secondus described the incident as a civilian coup which has brought the nation's democracy to its knee.

Secondus also alleged that the unsavory situation in Ekiti, was being  orchestrated by the APC- led Federal  Government to scuttle the July 14, 2018 governorship election In the state.

According to him, the whole drama is meant to facilitate the bid of the ruling party to embark on self-succession.

Secondus also alleged that the invasion of the Ekiti State Government house and assault on ‎Governor Fayose was another plot to assassinate the Governor and blame it on the usual accidental discharge by one of the security operatives.

The party chairman alleged that deployment of 30, 000 police men and some military personnel to Ekiti was to warrant mass arrest and harassment of innocent Ekiti citizens.

Governor Fayose had earlier raised alarm over invasion of the government house by armed security operatives.