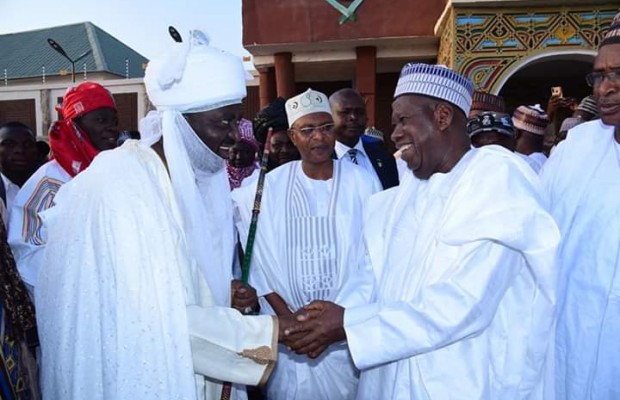 A Kano High Court has for a second time stopped Governor Abdullahi Ganduje from acting on the newly enacted emirates council law in Kano state.

Galaxy correspondent, King Richard reports that Mr Ganduje had a few days ago signed the Kano Emirates Council Law 2019, which created four emirates in Bichi, Rano, Karaye and Gaya local government areas– after the emirates bill was passed within a week by the Kano State House of Assembly, without a public hearing.

The governor had already appointed Emir Muhammad Sanusi II, who is believed to be the target of the emirates law, as the head of the new Council of Emirs as contained in the controversial law. Mr Sanusi has however not reacted to the appointment.

However, in a ruling, a Kano high court, presided over by Justice A.T Badamis restrained Mr Ganduje (3rd respondent) from acting based on the controversial Kano Emirates Council Law, 2019.

“Upon carefully running through the motion ex-parte, dated December 9, 2019, filed by the plaintiffs/applicants, accompanied by the attached process as well as exhibits.

“It is hereby ordered as follows:

“That an order of interim injunction, is hereby made restraining the 3rd respondent, from taking away the functions and powers of the applicants under the Kano States Emirates Council Law, 2019, or taking any steps whatsoever under the Law without consultation with the applicants pending the hearing and determination of the motion on notice

“That the matter is hereby adjourned to December 17th, 2019 for hearing of the motion on notice".