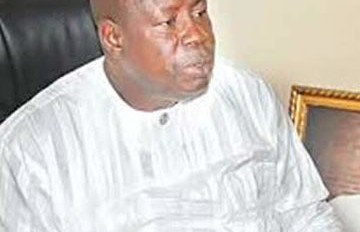 He was said to have died on Tuesday afternoon at the Zenith Medical Kidney Hospital, Abuja, and was buried Tuesday morning in his house at Elebu, Ibadan according to Islamic rites.

The circumstances that surrounded his death were still sketchy at the time of filing this reports.

Oyerinde, who became the state chairman of the union in 2011, started transport business from being a bus conductor in 1975, got his first driver's licence in 1979, became a full-fledge member of NURTW from 1983 till date.

Oyo state governor,  Senator Abiola Ajimobi, however, has agreed with the national body of NURTW that Olajide should fill the vacuum created by Oyerinde's death in an acting capacity while he urged drivers in the state to respect this decision and go about their lawful activities without rancour.

The national NURTW boss, who made the announcement, monitored on a private radio station in Ibadan, described Oyerinde's death as unfortunate, saying he was a man of peace.

In a statement Special Adviser, Communication and Strategy, to the governor, Bolaji Tunji, on Tuesday, Ajimobi said he received the news with a heavy heart describing the death as a huge loss to the family, the state and the South West.

The governor said he was particularly pained because he had lost a dependable ally and purveyor of peace.

Ajimbi enjoined the good people of Oyo State to be vigilant around the motor parks and report any act capable of breaching the public peace without delay.

The governor sued for calm and admonished the NURTW leadership in the state to eschew violence or leadership tussle at this time when he said they should maintain sobriety in honour of the deceased.