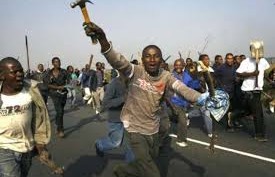 The Benue State Police Command says four of its personnel have being killed at Anyibe, in Logo Local government area of the state.

The police public relations officer ASP Moses Yamu, who disclosed this to newsmen, expressed regret that its personnel came under insurgent attack yesterday night at about 6 pm and early this morning.

The policemen are part of those deployed to maintain peace and order in the troubled communities of the state due to herdsmen attacks.

According to the police image maker, additional reinforcement including air asset of the police have been deployed by the inspector general of police in pursuit of the criminal elements

While assuring the people of the state that the criminal element will be arrested with their weapons and brought to justice.

Meanwhile, the chairman Logo Local Government area of the state Richard Yanjo, confirmed the attack on a phone call saying some policemen were injured with some missing.