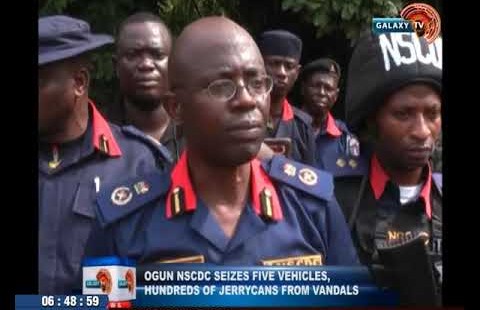 Men of the Nigerian Security and Civil Defense Corps in Ogun state have seized another five vehicles and more than 150 jerry cans loaded with premium motor spirit at Ipara Remo area of Ogun State.

The Commandant of the Corps in the State, Hameed Abodunrin said the seized items belonged to some suspected vandals who ran for their lives when his men busted them while trying to steal the commodity.

Leading the operation, the State Commandant, Hameed Abodunrin, said officers of the corps succeeded in preventing the suspected vandals have a successful operation despite shifting their loading point to another location within the forest in Ogun East Senatorial District.

He commended residents of the state for their supports for the Corps and their love for the country. He noted that they have been providing useful information to the Corps. On those who support vandals to carry the illicit operations in their area, the Commandant warned them to desist from such or be ready to face the consequences.

He expressed the readiness of his men to confront and prevent those who may want to cause civil unrest or working towards sabotaging the nation's economy.