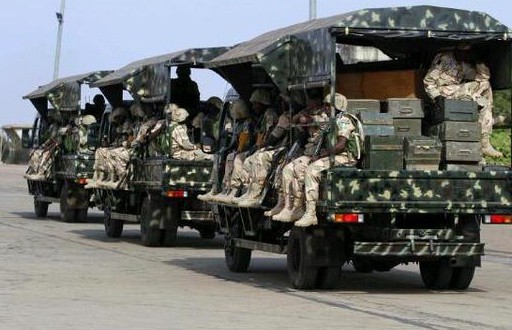 Troops of the Joint Military Task Force in the Niger Delta code-named Operation Delta Safe has killed four suspected militants believed to be responsible for the killing of a soldier at Ogbogbagbene community, in Bomadi local government area of Delta state.

The commander Operation Delta Safe Real Admiral Suleiman Apochi made this known while briefing newsmen at the headquarters of the command in Igbogene community of Bayelsa state.

Addressing journalists in the presence of other security operatives, the commander who was represented by his deputy Brigadier General Kevin Aligbe spoke on the operation.

On the allegation of harassment of civilians in the Delta community, the Deputy Force commander urged members of the public to disregard it.

It will be recalled that suspected militants had last week killed a soldier of the Joint Task Force, while the military have since intensified its operations in the creeks.