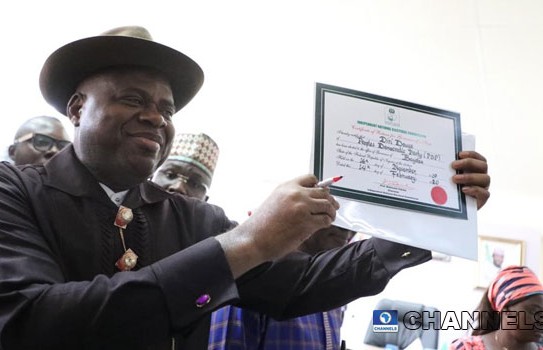 The Independent National Electoral Commission (INEC) has presented the Certificate of Return to Senator Douye Diri recognizing him as the governor of Bayelsa state.

His deputy, Senator Lawrence Ewhrudjakpo was also presented his certificate of return.

INEC commissioner in charge of south-south May Agbamuche-Mbu who presented the certificate of return to the senator said the exercise was in line with the supreme court judgment of Thursday, February 13 which withdrew the certificate earlier presented to the APC candidate, David Lyon.

Responding to the gesture, Senator Diri expressed gratitude to God for making it possible for him to recover his mandate.

Earlier, Chairman of the commission, Professor Mahmood Yakubu said the duo was issued certificate having scored the required number of ballots as recommended by law.

Yakubu said the lawful and valid votes cast in the November 16 gubernatorial election now stand at 146, 999 out of which Senator Diri scored the highest votes of 143, 172 votes.

The INEC chairman said the candidate scored more than 25 percent of the lawful votes cast in all the eight local government areas of the state.

He said the total number of registered voters in places where an election was not held or canceled as a result of sundry violations is now 90,822 adding that the Accord party came second with a total of 1,339 votes bringing the margin of lead to 141,833.

Mr. Diri and his deputy would be sworn in later today.