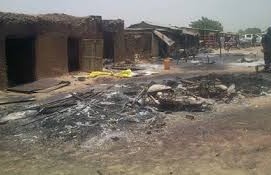 Twenty-One people have been killed in Okokolo community in Agatu local government area of Benue state by armed militia on Sunday while property and buildings worth millions of naira were razed and destroyed by the suspected militia.

Ikwulono said the incident took place when villagers were in their various Churches worshipping God.

He regretted that the attack, which he described as barbaric, unwarranted and inhuman, occurred after a series of peace meetings have been called.

He stated that a day before the attacks, Agbaduma and Abugbe community signed a peace agreement and promised to remain peaceful and ensure that there would be no further problem among themselves.

He, however, said the military and the police have been deployed to the place.