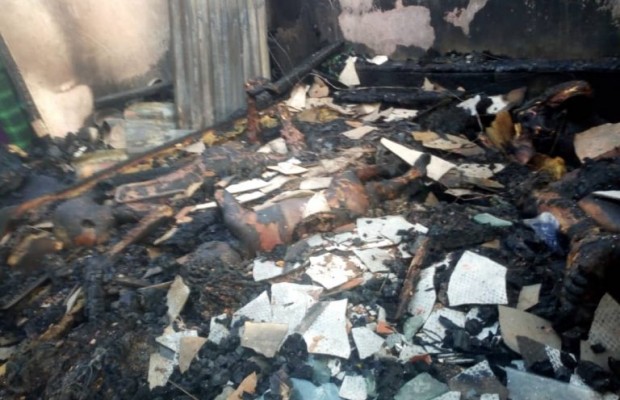 It was a sorrowful and huge calamity at Ehin-Grammar, Molete, Ibadan, Oyo state as 3 children from the same parents were burnt to ashes in a conflagration.

The incident according to an eyewitness occurred around 1 am on Friday, as the eight rooms apartment went up in flame. The three children burnt were Glory, 13 years, Samuel 7 years and Darasimi 3 years.

Correspondent Kunle Ojo reports that the Assistant Director of Fire Service in Oyo state, Manhood Adewuyi who led his men to the scene, attributed the incident to carelessness on the part of the parents who were not around when the incident happened.

He appealed to parents and other residents to be careful and always allow adults to stay with their children and wards when they are going out.

According to Adewuyi, the entire eight rooms in the building were razed while the three children were burnt beyond recognition.

Our Correspondent learnt that the remains of the children had been evacuated from the scene by officers of the state police command.