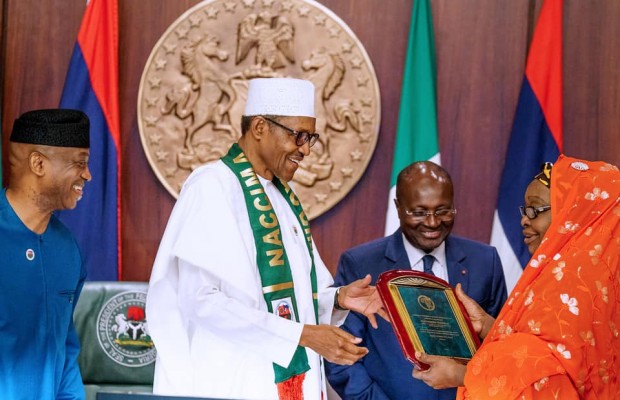 President Muhammadu Buhari has said that everyone must play by the rules when it comes to trade and business activities that are central to Nigeria’s economic development.

President Buhari spoke at State House when he received a delegation from the Nigerian Association for Chamber of Commerce, Industry Mines and Agriculture (NACCIMA), Federation of West African Chambers of Commerce and Industry (FEWACCI) and representatives of the Organised Private Sector (OPS).

The President, who reiterated the commitment of his administration in ensuring that the trade and business sector continues to flourish in job creation, noted that a critical success factor was the adherence to law and ethics by all stakeholders.

President Buhari also used the occasion to inform the delegation that the decision to close Nigeria’s land borders for a limited time due to massive smuggling activities had started to yield positive results.

He said his administration will continue to solicit the support of the organised private sector, both in Nigeria and across West Africa, to bring an end to the dumping of substandard items.

The president also urged the Association, which is a member of the National Action Committee on the implementation of the AfCFTA, to continue its ‘‘positive and patriotic contribution’’ towards achieving a free trade area that employs Africans to produce quality made in Africa products.

In her remarks, Hajiya Saratu Aliyu, President FEWACCI, NACCIMA and OPS, commended the recent decision by the President to constitute a new economic team to steer the Nigerian economy on the path of sustainable growth.

On the Economic Advisory Council (EAC), she said NACCIMA, FEWACCI and indeed the OPS are full of hope that a new era is on the horizon with the calibre of persons on the team which reassures us at the OPS that Government is ready to turn around the story of Nigeria.

Aliyu also hailed significant accomplishments recorded in all sectors of the economy including but not limited to reduced corruption, foreign exchange stability, bottom of the pyramid programmes, increased ease of doing business, increased capital expenditures, among others.

The president of NACCIMA appealed for the kind intervention of President Buhari in the provision of property within Abuja for the location of FEWACCI headquarters.

She also briefed the President about the 21-point NACCIMA programme, tagged ‘‘Unleash the Giant’’, adding that the association intends to engage the Federal Government on 16 of those stated points with the goal of ensuring business growth and socioeconomic advancement through public and private sector collaboration.