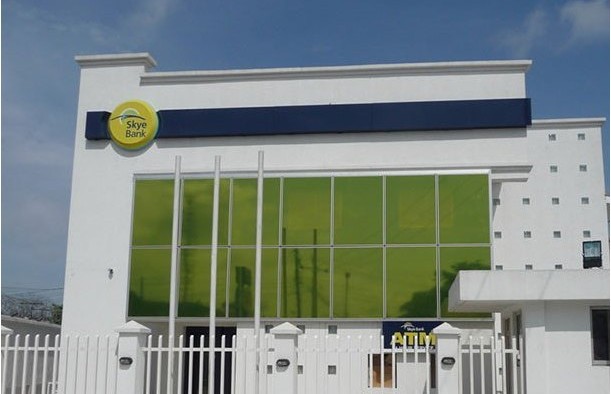 Business activities were brought to a standstill as ‎Bailiffs from the Osun State High Court stormed  three branches of Skye Bank in Osogbo to execute the order of  the court got by Tuns Farms Nigeria Limited against the bank.

Our correspondent reports that it was a difficult day for customers of the bank who were thrown into frenzy as the court bailiffs effect the court judgement at branches of the bank at Alekuwodo,Fagbewesa and Fakunle area of the Osun state capital.

At the early hour when business activities were begining to peak at the three branches of skye bank at Alekuwodo,Fagbewesa and Fakunle of osogbo, the osun state capital. Bankers and customers of the bank were looking forward for a good day until court baliffs Escorted by heavily armed policemen, stormed the banks, drove out the bank officials, locked the doors and removed some property of the banks.

A private agro-allied farm, Tuns Farms Limited and its subsidiaries had got three separate court judgments totaling  N3.9 billion against the bank. The farm claimed  in the writ of summon that the bank offeredit a credit facility of N414 million to develop its property in Abuja with a projected net income of N1.152 billion only for the bank to turn around and release only N150 million thereby breaching the contractual agreements entered with the company.

A certified true copy of one of the judgments delivered by Justice A. O. Ogunlade on March 14, 2014, stated that the bank breached the fundamental terms of the contract without lawful justification and thereby awarded what it called a special damage in full to the Claimant.

But Skye Bank PLC in its defence is claiming the plaintiff acted out of order by invading the bank premises stating that the defendant has already filed for a stay of execution of the appeal court judgement which the plaintiff is aware of.

However, while the plaintiff has vowed to extend the judgment to any branch of the bank in Nigeria if they could not raise the judgment sum ,the defendant has also claimed business operations will continue in all affected branches from tomorrow.