Mr. Babalakin was expected to appear in court on Thursday over criminal conspiracy and money laundering of N4.7 billion.

The businessman who was supposed to report to the Commission on Wednesday preparatory to his arraignment on a 27-count criminal charge before Justice Adeniyi Onigbanjo of the Lagos High Court, failed to do so, and has gone underground, the EFCC said in a statement on Wednesday evening by its spokesman, Wilson Uwujaren.

The commission had earlier raised concerns that Mr. Babalakin planned to evade prosecution by running out of the country at a time the accused was on admittance at the hospital, a claim he denied.

The commission said Mr. Babalakin is “dark-complexioned and speaks English and Yoruba fluently.”

The EFCC asked “anybody having useful information as to his (Mr. Babalakin’s) whereabouts” to contact the “Commission in its Enugu, Kano, Lagos, Gombe, Port Harcourt and Abuja offices” or through its telephone numbers, or any nearest police station.

House Of Reps Move To Stop NNPC's $1.5b Loan 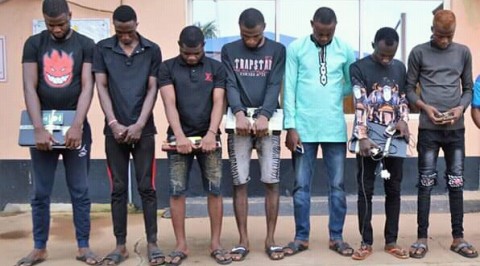