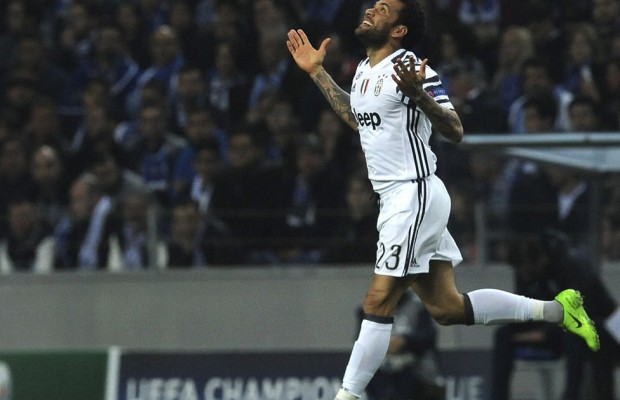 Marko Pjaca gave Juventus the lead on 72 minutes before former Barcelona defender Daniel Alves made it 2-0 on 74 minutes.Porto were reduced to 10 men in the 27th minute following the sending off of Alex Telles.

Substitutes Marko Pjaca and Daniel Alves struck goals within two minutes of one another as Juventus punished 10-man Porto 2-0 to take charge of their Champions League last-16 tie.

The hosts saw left-back Alex Telles dismissed after two bookings in a 74-second spell, the second after a wild sliding tackle on Stephan Lichtsteiner on 27 minutes.

His side spent long spells in their own half and survived a Paulo Dybala strike against the post before the interval.

But Juve - who had 77% possession - broke through when Pjaca drove low into the net five minutes after coming on and Alves finished from six yards 80 seconds after his own introduction.

The goals ensured Juve's fourth successive 2-0 win on the road in all competitions and their advantage now looks huge ahead of the return on 14 March. Other than a penalty shootout defeat to Inter Milan in December, the last time the Old Lady lost on home soil was in August 2015.