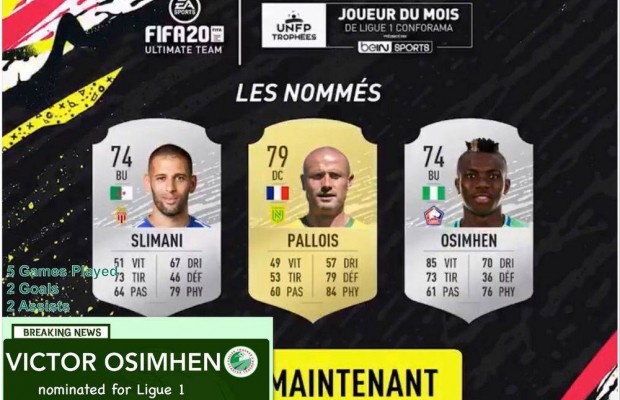 20-year-old Super Eagles and LOSC Lille forward, Victor Osimhen, is in the running to win the French Ligue 1 'Player of the Month' award for September.

Osimhen scored 2 goals and assisted two others in 5 games for Lille, on their way to 2 wins, 2 draws and a defeat, and he is up against FC Nantes defender, Nicolas Pallios and Algerian forward, Islam Slimani of AS Monaco for the coveted award.

The former Wolfsburg & Sporting Carleroi forward has been in excellent form for Lille this season, and is currently top of the French Ligue 1 goalscoring charts, with 7 goals in 9 games.

He will be expected to replicate his early-season success on Sunday, October 13, when the Super Eagles take on five-time World Champions, Brazil in a high-profile international friendly.

He scored his first-ever UEFA Champions League goal in Lille's narrow 1-2 loss vs Chelsea at the Stade Pierre Maurroy.