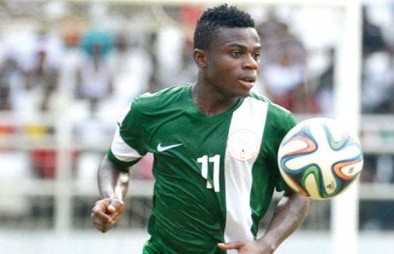 Nigeria attacker Moses  Simon  narrowly escaped  a serious  injury at a practice match between his Belgian Jupiler side Gent and  German second-tier club Nurnberg on Tuesday.

According to reports, the 22-year-old crashed to the ground after 24 minutes in the encounter eventually won 1-0 by Gent, sparking fears that he had broken his leg.

The former  Ajax  player, who helped the Super Eagles qualify for the Russia 2018 World Cup, was rushed to  hospital  for urgent attention.

Grave concerns were held for the  possibility of the   former Slovakia-based  winger, who has scored five goals for  the Buffalos this term, representing Nigeria at the summer  World Cup.

However,  Brussels-based newspaper reports  that   Simon only suffered a serious leg wound.

The player, who withdrew from  Nigeria’s  friendly against South American powerhouse Argentina in Krasnodar, Russia,  on November 14 due to injury, has been linked with a £6m move from Gent to relegation-threatened Premier League club West Brom in the January transfer window.

He has also been linked with the likes of West Ham, Swansea and Stoke.