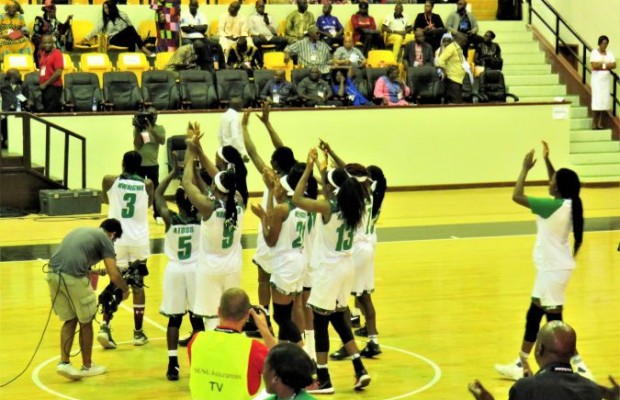 D’Tigress of Nigeria moved a step closer to actualize a third Afro basket title ambition and a World cup ticket as they booked a quarter finals ticket at the 2017 FIBA Afro basket competition going on in Bamako, Mali with another resounding win against Egypt.

The team recorded a new team record with a 106points to 72 pummeling of the North African side to become the first country to book passage to the next round after their third group game played on Sunday. Evelyn Akhator shone like a million stars as she provided the needed platform on which the team built their victory.

The Dallas Wings player scored 24points, 5 assists and another impressive 13 rebounds against a more physically imposing Egyptian side. Ever dependable Ezinne also stepped up her display to record 18points, 3 assists and 5 rebounds during her 24:08 minutes’ stint on the court.

A breakdown of the four quarters saw the Sam Vincent led team ending the first quarter with a 20-15 points lead before scoring 30 more points in the second quarter against their opponents who could only manage 14 more points. The team extended their lead to 79-49 at the end of the third quarter before hitting the 100 point mark as they emerged with a personal competition record of 106.