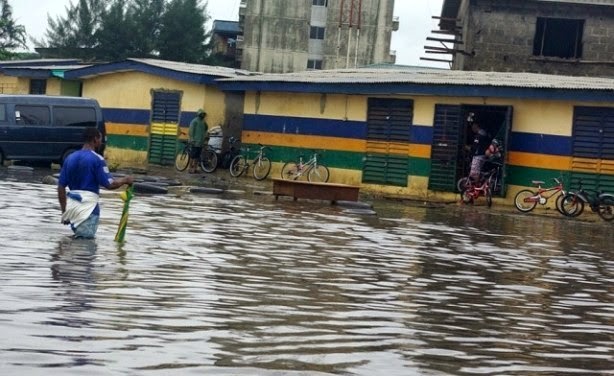 Authorities of the Ogun State Police command have been counting their losses following a heavy rainstorm that ravaged the headquarters of the command, where property that worth several million of Naira were destroyed. Property such as computers and other gadgets for investigation, including some important document and files, were destroyed during the incident. Not only this the rainstorm equally destroyed some portion of the police barrack at the command headquarters. The heavy rain-storm wrecked havoc on the major offices at the headquarters of the state Police Command and many of its barracks destroying documents and property worth Millions of Naira. The sections of the command affected includes the Department of Operations, some parts of the Department of Criminal Investigation, pay office and almost twenty buildings at the Eleweran barracks. The state Government delegation to the scene of the incident was led by the secretary to the Government, Barrister Taiwo Adeoluwa, who described the loss at the police headquarters as monumental, adding that the rainstorm damaged vital equipment and document in most of the offices. He sympathised with the authorities of the command and individuals affected by the disaster noting that officials of the State Emergency Management Agency have been directed to visit the scene to ascertain the extent of damage done by the rainstorm. The Secretary to Ogun state Government assured the Commissioner of Police in the state, Ikemefuna Okoye and other officers of the command of the readiness of the state government to come to their aid in this time of need stressing that, the families affected by the incident would be taking care of by the government. Responding, the Commissioner of Police Ogun State Ikemefuna Okoye, Commended the quick response of the state Government to the incident saying, the disaster was unfortunate and painful particularly the havoc done on the residences of the police personnel in the barracks. He added that the incident was a temporary setback and would not affect the moral of officers of the command in the fight against crimes across the state adding that, affected personnel should be calm as all efforts would be made to accord them palliative measures and aides to replace some of the damaged property.