No Going Back To Office, Court Tells Sanusi

Sanusi Lamido Sanusi, suspended governor, Central Bank of Nigeria (CBN) has lost his bid to return to office as the Federal High Court‎, Abuja Division, yesterday rejected a request made by Sanusi to be restored to his position as the governor of the apex bank.

Ruling on the ex-parte motion brought before him by Sanusi, Justice Gabriel Kolawole declined on the ground that it would be unfair to grant such an application without hearing the other parties.

Sanusi had filed the application on February 24, 2014, praying the court to make an order of interlocutory injunction restraining the defendants from preventing him in any manner whatsoever from performing the functions of the governor of the CBN and enjoying in full, the statutory powers and privileges attached to the office.

He prayed the court to expeditiously grant his interlocutory application, and maintained that any delay might cause irreparable damage to him in the exercise of his statutory duties as the CBN governor.

But Justice Kolawole in refusing the application said he was of the view that the court had not only the judicial powers to declare the suspension unlawful but to order that the plaintiff be returned to perform his duties as the governor of the CBN.

He said that the court could also, even where the tenure had lapsed, order the defendants to pay the plaintiff’s remunerations and allowances on the basis that his suspension carried with it the stoppage of these.

According to the trial judge, it is unsafe, judicially speaking, to embark on far-reaching interim orders which have all the attributes of a mandatory injunction without giving the defendant a hearing.

Pondering on the reliefs sought, the trial judge said he felt hesitant and constrained to grant the plaintiff’s motion ex-parte.

The judge said that another issue he would like to raise when defendants had been duly served with the originating summons and motion on notice was whether in the light of the constitution of Nigeria 1999 as amended, the Federal High Court still has the jurisdiction to entertain issues dealing with employment, notwithstanding the questions the plaintiff had set down for determination in his originating summons.

In the light of the views expressed and the analysis, the court refused the plaintiff’s ex-parte motion and directed that it be served on the defendants.

The judge further ordered the plaintiff to effect service of the originating summons on the defendants together with the motion on notice. The court then adjourned the matter to March 12, 2014.

Sanusi’s application was supported by a nine-paragraph affidavit and two exhibits attached and marked Exhibit AA1 and AA2.

Exhibit AA1 was a copy of a letter dated June 2009, titled “Appointment as Governor of Central Bank of Nigeria.”

By Exhibit AA1, the plaintiff was advised on his office as the governor of CBN acknowledging that as the leader of the apex bank, he was governed by the Central Bank Act No. 7 of 2007 and other terms of service applicable in the apex bank.

In the suit filed by his lawyer led by Chief Kola Awodein (SAN), Sanusi told the court that his interlocutory application was necessary because of the issues raised in the suit and that delay might cause irreparable damage to him in the exercise of his statutory duties as the CBN governor.

He urged the court to exercise its discretion in his favour by granting the interlocutory injunction, saying that the President’s continuing unlawful interference with the management of the apex bank, unless arrested, posed a grave danger for the nation’s economy and justified the court granting his application which would result in maintaining status quo ante bellum, that is, for his return to his office as the governor of the CBN.

In the affidavit deposed to in support of his application, Sanusi said in the course of his duties as the CBN governor, he discovered certain discrepancies in respect of amounts repatriated to the Federation Account from the proceed of crude oil sales between January 2012 and July 2013 and that he expressed concern in respect of the said discrepancies and had cause to inform the National Assembly of the said discrepancies because they affected the revenue of the federation and the national economy.

He further stated that the action of President Goodluck Jonathan in purporting to suspend him from office was aimed at punishing him for these disclosures.

He also stated that he was challenging the President’s power to suspend him from office, noting that the President did not approach nor obtain the support of the Senate based on his discussions with several senators, including Senator Bukola Saraki.

He said: “I have been informed, and I verily believe the information given to me by Senator Bukola Saraki to be true and correct that the Senate did not give the President any support for my purported suspension and removal from office as the Governor of the Central Bank of Nigeria.”

Sanusi further stated that the action of the president in suspending him from office was contrary to the provisions of the Central Bank of Nigeria Act relating to the appointment and removal of the CBN governor and that his purported suspension amounted to unlawful interference in the administration of the apex bank and therefore is illegal, null and void.

He urged the court, in the interest of justice, to grant his reliefs.

Yobe Massacre: How My Mates Were Killed – Survivor 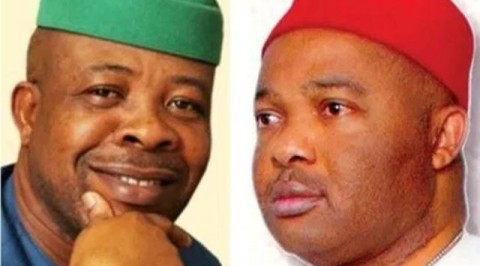