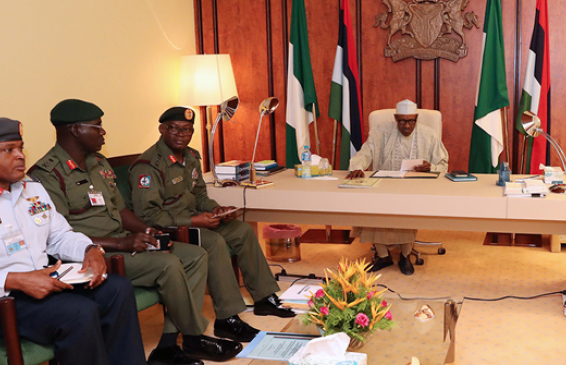 President Muhammadu Buhari met with security chiefs and the Minister of Defence, Mansur Dan-Ali, on Thursday to discuss issues of national importance.

The president who presided over the meeting which lasted for about four hours, immediately departed for Bauchi, Bauchi state, on an official engagement.

In a statement issued at the end of the meeting, minister of defence Mansur Dan-Ali said he updated the National Security Council on the security situation in the country.

The minister said that he also reminded the council that the nation’s armed forces in collaboration with other security agencies were doing all they could to address the turbulent security situation across the country.

He announced that security agencies had been directed to checkmate the criminal activities along Abuja-Kaduna highway through increased patrols along the axis to address cases of attacks and kidnappings.

The minister also reiterated the need for the deployment of the Nigeria Police and the Nigeria Security and Civil Defence Corps in all areas liberated by the military in the North-East.

He said this had become imperative in order to consolidate on the gains of military operations as well as to enable the military push forward in its clearance operations.

Mr Dan-Ali stated that he informed the council that Operation DELTA SAFE had sustained its operations against illegal activities in the Niger Delta region with resultant reduction in illegal oil bunkering, militancy and pipeline vandalism.

The minister, however, requested for provision of more equipment for the armed forces in order to sustain the tempo in the fight against insurgency and other security challenges across the country.

Buhari to proceed on another leave