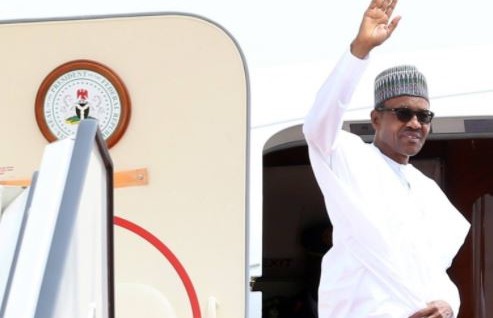 President Muhammadu Buhari has arrived in the Hague ahead of his scheduled appearance at the International Criminal Court (ICC) where he is expected to deliver the keynote address at the commemoration of the 20th anniversary of the adoption of the ICC Rome Statute.

The President’s aircraft arrived Rotterdam-The Hague Airport from Abuja at about 7: 23 p.m (Nigerian time) and he was welcomed by ICC President, Chile Eboe-Osuji, his Vice, Marc Perrin de Brichambut, Foreign Affairs Minister, Geoffrey Onyeama, Nigeria’s Ambassador to the Kingdom of the Netherlands, Oji Ngofa and Mr Robert Petri, Ambassador of the Kingdom of the Netherlands to Nigeria.

Prior to the President’s arrival, his Special Adviser on Media and Publicity, Femi Adesina had announced that while in the Hague, Buhari will speak at the Solemn Hearing to commemorate the 20th anniversary of the adoption of the ICC Rome Statute and also meet with the ICC Prosecutor, Ms Fatou Bensouda.

President Buhari is the only Head of State invited to the ICC’s 20th anniversary and senior Nigeria officials see it as a positive recognition and appreciation of Nigeria’s support to the ideals and objectives of the Court.

Nigeria’s Ambassador to the Netherlands,  Oji Ngofa,  told journalists that whilst there has been some criticism of the Court, President Buhari believes that its work is vital to preventing impunity worldwide and ensuring accountability for perpetrators of the most serious crimes.

Ngofa believes that the president’s visit will also cement bilateral relations between Nigeria and the Netherlands particularly in the areas of, Trade, Agriculture, and commerce.

The Rome Statute was adopted on July 17, 1998, but the ICC wasn't officially established until July 1, 2002, with a mandate to prosecute war crimes, crimes against humanity and genocide.

At present, 123 countries are States Parties to the Rome Statute of the International Criminal Court.

The President is also scheduled to meet with Dutch Prime Minister, Mark Rutte and their discussions will focus on migration, peace, and security, humanitarian issues, economic cooperation, among others.