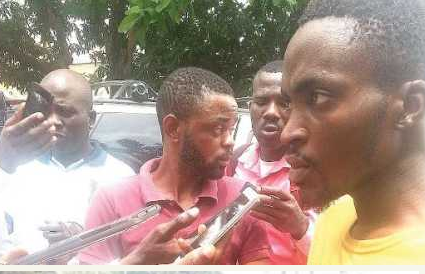 The Police yesterday paraded two suspects accused of strangling an Uber driver to death at the Ogba area of Lagos state. The suspects were identified as Osaro Egbomrewen and Michael Eyeoekpe.

The deceased identified as Innevosa Emmanuel had reportedly responded to their call when the duo requested for the service of a driver to take them to Oke-Ira in Ogba.

The two suspects allegedly asked the driver to divert Oremeji street where they strangled him to death after which they dumped his body at the front of a church and went away with his vehicle.

The suspects and another unidentified person who is presently at large were arrested in Benin, Edo state when they were trying to sell the stolen vehicle.