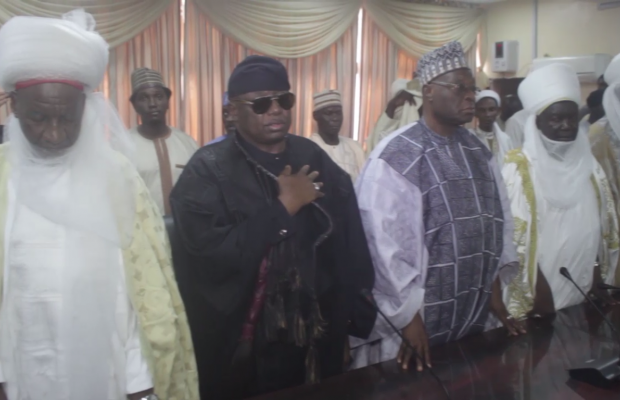 Barely one week since the executive governor took the oath of office, the Adamawa traditional rulers led by the Lamido of Adamawa has vowed to support and cooperate with the government of Ahmadu Umaru Fintiri.

The leader of the group and Lamido of Adamawa Barkindo Mustapha said this when they paid a congratulatory visit to the governor of Adamawa State at the Banquet Hall of the government House, Yola.

Mustapha assured the governor of Adamawa that the traditional rulers will work hand in hand with him and will give him advise where necessary.

In his response, the Executive governor of Adamawa state, Ahmadu Fintiri appreciates them for coming and urged them to act as fathers of the nation and key in with his plans.

Fintiri said he is ever ready to work with them in order to achieve his aims by transforming Adamawa State, appealed to them to give him their maximum support and cooperation for the period of four years.

Also, the 6th assembly Members led by the speaker of the House has paid a visit to the governor of Adamawa State where they assured him of a good working relationship and will support him in all ramifications.

The Executive governor Ahmadu Fintiri thanked the 6th assembly for doing a job well done for the period of four years.

He pleads with them to extend the same to his government. He assured them of his full support and cooperation to the 7th assembly.