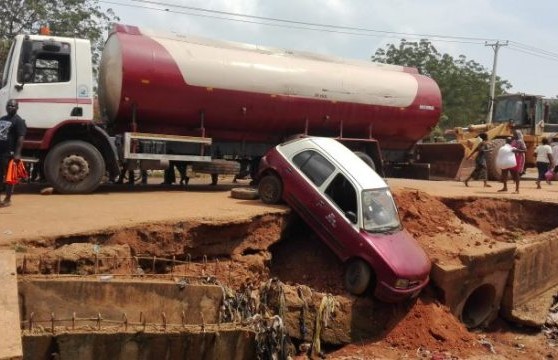 Seven students escaped death in Ibadan, the Oyo state capital on Friday when a commercial car veered off the road into a nearby ditch to avoid a head-on collision with a truck.

The incident which happened very close to Akinyele local government Secretariat along the controversial Moniya-Iseyin road led to confusion as Victims scampered for safety.

Correspondent Kunle Ojo reports that the commercial cab, with seven students, was coming from Iseyin end of the road while the truck laden with premium motor spirit otherwise known as petrol was heading towards Iseyin.

It was gathered that the driver in an attempt to avoid a head-on collision with the truck suspected to have lost control, veered off the road into the ditch.

The students according to eyewitnesses were rescued unhurt while one of them had a slight head injury.

Officers of the Moniya Divisional Police headquarters were seen supervising efforts to remove the truck and the car.

As at the time of this report, the two vehicles have been removed while gridlock experienced since the time of the incident has been cleared.

Recall that the immediate past administration in Oyo state awarded the road for #7 billion and about #2.5 was said to have been released to the contractor.

The new administration under Seyi Makinde during an inspection of the project said the level of work on the road was about #150 million and alleged that the contractor has no capacity to handle the project.

The state government has since revoked the project and re-award it to another contractor.