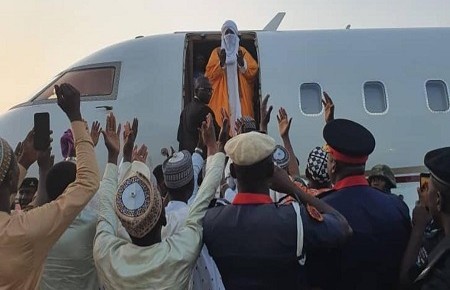 The legal team of the deposed Emir of Kano, Muhammad Sanusi the second has vowed to take legal action over what it called his illegal detention and banishment after his removal by Kano State Government yesterday.

Abubakar Balarabe-Mahmoud, a Senior Advocate of Nigeria (SAN), and leader of the team said this while briefing newsmen on Tuesday in Kano. He said although they have not spoken to the Emir since yesterday, they understand that he is in a remote part of Nassarawa State after driving for nearly seven hours in the night and arrived at about 2.00 a.m, this morning.

The legal team called on the Police, The Department of the State Security Services and the Attorney general of the federation to ensure the deposed emir’s immediate release or face legal action.

The legal team described the practices of banishing deposed emirs from their domain as strange to the Nigerian constitution. While sitting in the case of a deposed emir, Mustapha Jokolo and the government of Kebbi state said the courts have already spoken against such acts.