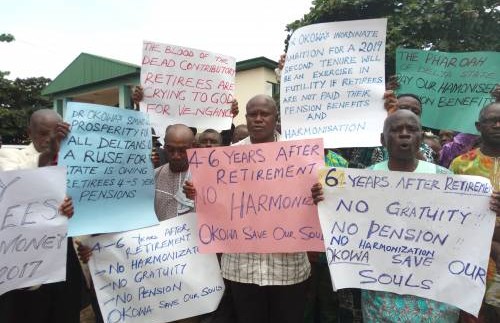 Pensioners under the umbrella body of the Association of Contributory pensioners Delta state chapter have protested to the Delta State Government House in Asaba over what they described as the inability of the Okowa led government to pay them their harmonization and eighteen thousand Naira minimum wage.

The pensioners, who displayed placards with different inscriptions to demonstrate their plight, fingered the administration for not taking their welfare seriously.

Speaking on their plight, the association chairman and his vice said the Delta state government have not been fair to them.

On his part, the Public Relations Officer of the association stressed that the problem started almost at the exit of the former administration.